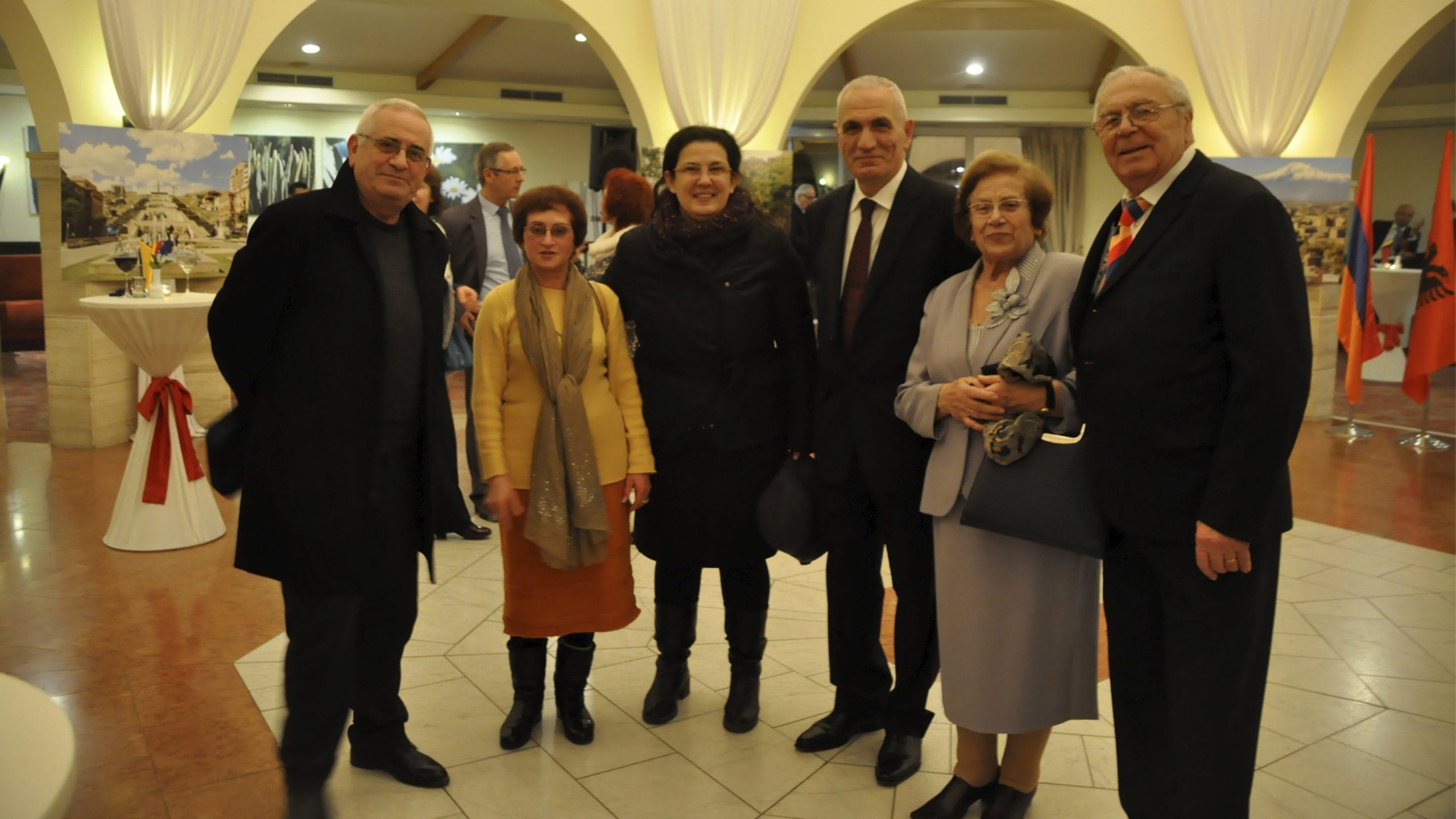 I feel very excited and honored from your participation, and I would like to say a few words in the occasion of this important event for two countries such as Armenia and Albania. Two countries, which are geographically and population wise, quite similar, with unique languages, and have always been in the focus of important historical and linguistic studies. Two countries with ancient history which has left traces throughout the centuries.

Armenia qualifies as the first state in the world which embraced Christianity as an official religion in the 3rd century and one of the first countries with a unique alphabet since the 4th century. These two factors are enough to understand the role of Armenia and Armenians in the world history.

It is the first time in history that Armenia has an Honorary Consul in Albania and I feel much honored but at the same time a very great responsibility towards the important duty which I have been trusted with – that of the representation as an honorary consul.

Having an Armenian father and an Albanian mother, makes me even more conscious and passionate in the successful fulfillment of such duty

I am neither a politician, nor a career diplomat, and I do not think that I will ever follow any of these paths in the future, furthermore I do not consider myself young enough to aim for such a thing. (There is a saying about the Armenians; they are born as businessman and die as poets, but I do not think this applies in my case…?!) But I think that, in the absence of information on the cooperation possibilities with mutual interest for both countries, the time has come to start and develop the exchange of this information with the expectation of cooperation with mutual interest in the fields of culture, economy, tourism and more. This is why, the assignment of an Honorary Consul represents an important step for the initiation of such cooperation.

Participation in this event (the representatives of the Albanian Foreign Ministry and other important ministries, honorary consuls of some countries, representatives of the business, the Armenian community in Albania, friends and sympathetic of Armenia and Armenians) gives me more confidence that this cooperation will bear fruit.

The first steps have begun with the publication of dictionaries and books, the production of documentaries or organization of events in commemoration of significant events of Armenia and Armenians, or visits of representatives of Armenia in Albania, games of the national football teams, athletics, weightlifting etc.

A few months ago I had the chance to visit Armenia again after a relatively long time from my previous visit. I was able to see significant changes in all directions, as in the economic, architectural, modernization of life, especially youth, as well as an opening so much more to the world, an infrastructure to improve significantly and a large increase in the number of tourists not only from the diaspora.

Cultural tourism in Armenia and coastal tourism in Albania are fields in which there is a need to hold activities from both countries. On the one hand, Armenia, with its mountainous terrain, also holds innumerable objects which testify an ancient culture which was historically documented, on the other hand, Albania, which does not fall behind regarding the evidence of the cultural history, with its calm nature and beautiful coastline, have something to offer to their citizens. Organization of different events such as art exhibitions, friendly sports events, musical performances, etc. would be an excellent opportunity to present the cultural treasures of the two countries.

Recognition of opportunities and the creation of facilities for investments in Armenia and Albania is another area that should be encouraged through chambers of commerce of the two countries through participation in trade fairs in Armenia or Albania (can mention here the agro-food industry).

Football matches between the two national teams was another occasion to get mutually acquainted Armenia and Albania and Armenians as well as for Albanians. Throughout the time of my stay there as well as during the match in the stairs on the Yerevan stadium there was a clear feeling of friendliness and understanding between the present Armenians and Albanians.

During my speech it is often mentioned Armenia and Armenians, and this not without purpose. The Armenian Diaspora is an important factor in the life of Armenia since 8 million belong into this diaspora. Those people through their most prominent artist, businessmen, politicians, athletes have become the best ambassadors of Armenia and Armenians worldwide. (surely you heard here tonight in the background the voice of Charles Aznavour that is only one of them)

The Armenian community in Albania has been and remains a very small community, but a solid indeed. Here they live about 30-35 families of Armenian origin, which have maintained a good part of customs and in many cases even the Armenian language. This small community has been lucky to live among Albanians who are extremely welcoming which was showed since their arrival in Albania until nowadays. They found in Albania a second home and they had no problems for their integration in the Albanian society, and for this they are going to be always grateful to the Albanians. Almost all members of the community were able to be educated in universities and already know they have made a good name in Albania in their professions as professors, engineers, doctors, artists, economists, etc.

And now I would like to cordially thank all of you for your participation in this event which was not randomly arranged today on January 7, which Armenians consider as a day to ancestral memory.

I would like to thank Mr. Niko and Edmond Leka for the encouragement and support.

Special thanks also for the Berzh Piranjani with his persistent and systematic perennial silent work, has ensured that today we have in hand two books; a dictionary (Armenian – Albanian) and a guide book for Armenia (country and people). These may be found in the tables located at the end of the hall.

And finally thank my family and especially Mirelen which has facilitated my task and without the help of which this activity would have hardly been realized.

Concluding my speech before I give the word to the representative of the Armenian community in Albania, Mr. Sari Cakmaxhian, who will greet the participants with a brief word, allow me to wish you from the heart:

“Happy new year 2016! Health, prosperity for you and your families. 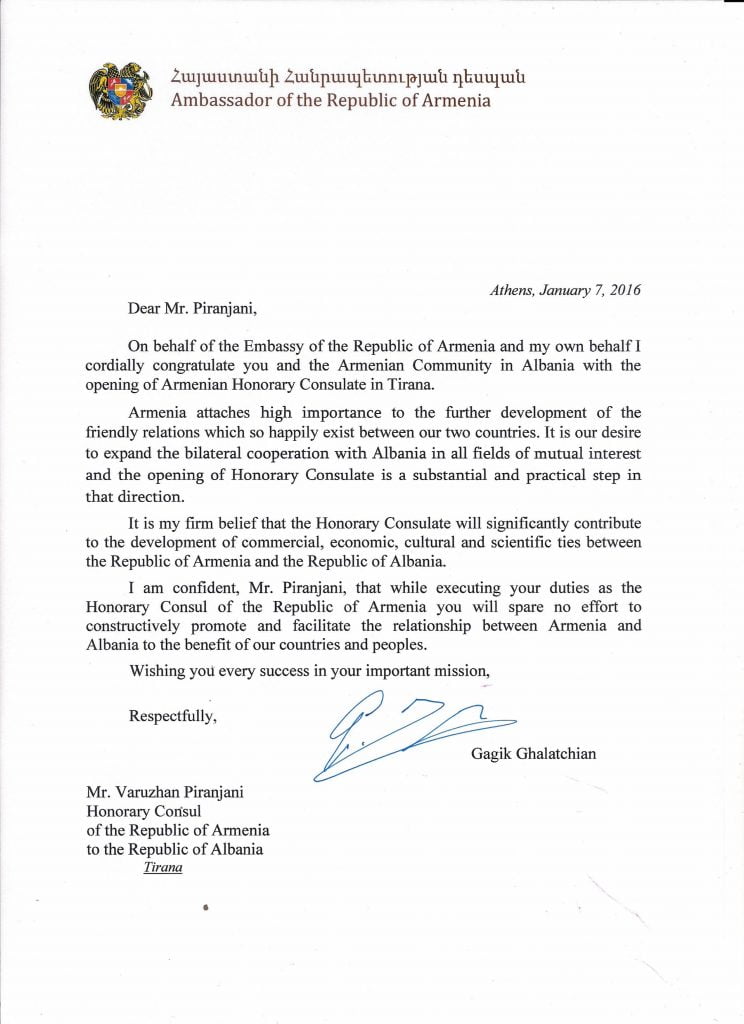